I bet you guys are wondering "What took you so long Cecil? Why has it been over a month since you've updated?"

Piling classes and college applications, and finding a job on top of other happenings, I haven't had time to update, and I soon just forgot about the blog.

Yes. That last post, without the video, was cryptic. I'm sorry Blogger was being a fucking pain in the bum, and not uploading it, even after I rendered it in 720p on Sony Vegas.

1. Claire dumped me, for a girl no less. Long story, rather not get into it.

2. Greg won't talk to me for some reason.

3. I have become an insomniac.


One of these things is beneficial to me. Wait, nope.

None of them are.

I've been really depressed and feeling like shit for these last couple weeks 'n' stuff. I apologize if it looks like I'm making excuses, when in fact I am just stalling

Stalling for explaining what happened in that video, since FUCKING BLOGGER DIDN'T UPLOAD IT.

Basically, I have a band. We were looking for a practice space to set up. (Band's name is Living Comatose and we play post-punk) My mutual friend between Greg and his brother Tom, was a guy named Danny, who offered to show us an abandoned location that could possibly work as a practice space. Everything seemed fine, that was until I walked into a room alone and the door shut on me. It also locked itself.

Now, this could be seen as a prank from one of the other guys, but the thing is...

The bedroom door had no locks.


So, yeah. The door shut, it locked, Danny had to break it down, and then out the back, Danny sees eyes, and a figure. Not related, but one next to the other. (The eyes were apparently next to the tall figure.)

So! Danny flips out, runs to my car, and we drive all the way back to my house, where Danny stops, sees something, and freaks out a second time. So, we get back to the house, Danny's pissed because we don't believe him. So he gets pissy, and almost punches Tom in the face after Tom made a comment about Danny's upbringing.


So- in short- a lot happened.

I wanted to do this video so you guys could see my face, but since apparently blogger is being A FAT FUCKING DOUCHEFACE, you'll have to settle for a picture instead. Enjoy. 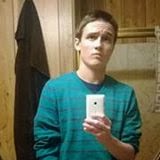 Yeah, so enjoy that.
Freaks.
(ILYGUYSIMJK)
I'm not really sure what to do now. I guess I'll keep updating the blog anytime something happens, but I'm hoping that'll be never.

*Le sigh* Where can I find a man in my life?